A Spectacular Gallery of Mayan Ruins (With Illustrations by Frederick Catherwood)

With many of Catherwood’s illustrations of ancient Maya ruins, we present a collection that draws one back through time. 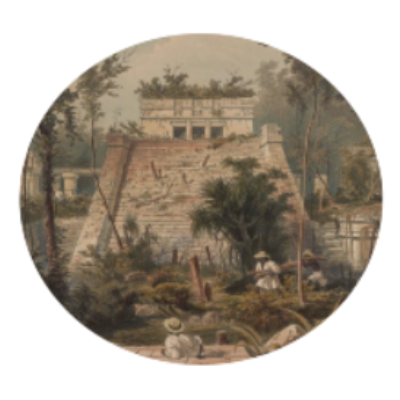 Ruins —spaces devoured by time— fascinate because in their apparent emptiness, it seems that the past still is. It’s almost inevitable when we find ourselves within these spectral dimensions, that we imagine those who lived and transited through them, even centuries ago. One almost hears their voices and sounds. That’s what makes ruins architectural ghosts. They’re spatial reminders of what no longer is —and those ghosts never cease to be attractive.

Mexico is full of archaeological areas and the ruins of ancient cities and civilizations. These represent some of the country’s greatest treasures. Among many others, the ruins of ancient Maya cities stand out. They’re witnesses to a culture that shone with a deep sophistication and very particular relationship to beauty.

The Maya culture had its great boom —political, cultural, urban, and architectural— in what’s known today as the Classical Period, between 250 and 900 C.E. But from the 4th century onwards, the great Maya cities of the central region suffered a political collapse and gradually began to depopulate. Mayan cities of other regions soon followed. It marked the beginning of the end of the splendor of ancient Maya culture. Although inhabitants remained, (the Maya are a living culture, even today), the grandeur of the urban centers went into decline and by the time the Spanish conquistadors reached their shores, Maya communities were fragmented and isolated.

At that time, many of the ancient buildings and temples of the Maya cities, witnesses to a great magnificence, fell into abandonment, only to be quickly devoured by the jungle. In 1839, two European explorers, one an architect and draftsman, the other, a writer, arrived to explore the ruins of several ancient Maya cities. Their names were Frederick Catherwood and John Lloyd Stevens. After several trips to Mexico and Central America, the two men provided testimony of their encounter with the Maya past. It was distilled into two books (written by Stevens and illustrated by Catherwood): Incidents of Travel in Central America, Chiapas, and Yucatan  (1841)  and Incidents of Travel in Yucatan  (1843). Some scholars consider the two travelers largely responsible for European interest in the culture of the ancient Maya.

The two books proved a great success in Europe, where cultures native to the Americas garnered enormous curiosity. One great merit of the project was in Catherwood’s illustrations. He’d used a particular instrument to capture the beauty that had unfolded before his eyes, the camera obscura. It’s an optical device which allowed him to project an image of the archaeological sites onto a piece of paper and to make a tracing.

Catherwood’s images remain spectacular. Through his mythic gaze, such places stand out from the jungle, and seem nearly unreal. And thus, portraits of some of Mexico’s most beautiful architectural ghosts came to be.