A diary, a poem, a calligraphy notebook and a drawing book, Frida Kahlo’s diary is one of the most important and intimate legacies of this great artist. 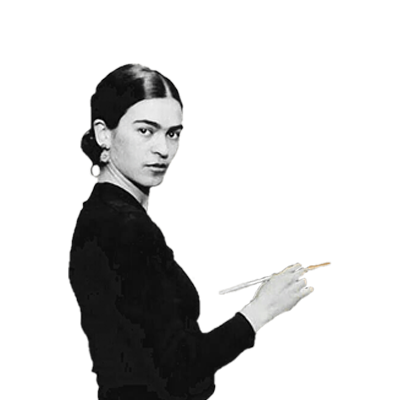 “Feet, what do I need you for when I have wings to fly?”  The quote is read in one of the nearly 200 pages of Frida Kahlo’s diary.  It’s a document in which Kahlo plastered her own interior for the final ten years of her life, from 1944 to 1954. The phrase, full of poetry and spontaneity, synthesizes the essence of her personal notebook. It reveals a strong, courageous, sensitive, deeply pained artist. There’s also a Kahlo endowed with an individual sense of humor and joy, untouched by even the worst of tragedies.

A little more than two decades have passed since the discovery and initial publication of Frida Kahlo’s diary. In that span of time, the importance of the document has taken shape for those who’ve known and appreciated Kahlo’s standing, as an artist, and as a woman. The record, both subjective and universal, is one of the most important and imposing legacies she left upon her death.

It needs to be kept on mind that the diary was written by the artist only for herself, with no literary intent, and much less, any intent to publish. This makes it a portrait —made of paper, ink, and painting— completely transparent, free, and fascinating. Diego Rivera, her two-time husband, appears constantly. Here are her political postures, her art, instruments, accidents, and operations, her absences, her pain (22 surgical operations), her pregnancies, her amputated leg, and her many ghosts. All come in different shapes, colors, formats, and textures; a bestiary of the many beings within Kahlo.

Walking through Kahlo’s texts, one might conclude that the diary has a poetic nature, rather than a narrative one. This is true even in the letters she wrote (to herself and to others). In these, one finds traces of multiple poetic styles which inadvertently slip in between the reflections and sentiments.

Among the many verbal enumerations—explorations of sound, rhythm, and the graphic character of writing —it’s easy to find the free word association exercises that reveal Kahlo’s interior in poems she may never have planned.

Among the words, there are also clues to Kahlo’s evident relationship with the poetry of the avant-garde. Finally, some works seem related, in one way or another, to what later came to be known as Concrete Poetry. This is characterized by an intimate relationship between form and typography —known especially for its various representatives in 1970’s Brazil, in Apollinaire’s poetry, and in José Juan Tablada’s visual poems. Kahlo’s intimate relationship with the visual, even that of written language, is everywhere evident.

Frida Kahlo’s diary is a pictorial and poetic work, a work of art composed in poems (sometimes involuntary poems), words, letters, doodles, lists, self-portraits, calligraphy, letters, drawings, stains, and symbols. The unity of these disparate elements integrates into one and many objects: an entire river, free, and powerful, that flowed within Kahlo.

An Intimate Self-Portrait, (Un íntimo autorretrato) consists of a facsimile color edition of Kahlo’s diary. This is accompanied by a magnificent introduction by the Mexican writer, Carlos Fuentes. The edition contains a transcription of the texts of the notebook. In addition, there’s also an essay by writer Sarah M. Lowe on the importance of the diary to Kahlo’s overall body of work.

Twenty years after the first edition of the diary, La Vaca Independiente published, once again, the facsimile version in color. On that occasion, the foreword was written by Karen Cordero Reimar and Eduardo Casar. It’s an invitation to the universe reflected in the Diary through new eyes.

After these multiple editions, La Vaca Independiente found in The Journal of Frida Kahlo a tool for transcending the work’s mere beauty. As a record of Kahlo’s inner life and as an artistic object, the diary is also an instrument of self-knowledge that results in possible exercises. Like a mirror, these function as a space to connect with our own interior selves —similar to what the diary, over a decade, came to be for Kahlo: a space for catharsis.

Claudia Madrazo, founder, and director of La Vaca Independiente, distilled a series of individual exercises that allow us to better know, accept, and transform ourselves, through sensitivity, creativity, and self-analysis. Beyond the wisdom contained in the journal, the writer draws on concepts from neurosciences to a theme as old as humanity itself: the inner journey. The exercises explore topics such as self-knowledge through art and creativity, the power of revelation in the personal journal, the importance of introspection to one’s emotional life, and techniques for clearing, resting, and observing the mind.

This practical notebook is an invitation to make such a journey through the art that we all carry within, and to create a private space that can be returned to at any time in life

You can purchase the two versions of Frida Kahlo’s diary, edited by La Vaca Independiente, in print and digital versions, at the following link.

Intimate Notebook Inspired by Frida Kahlo, in its digital version, is available here.