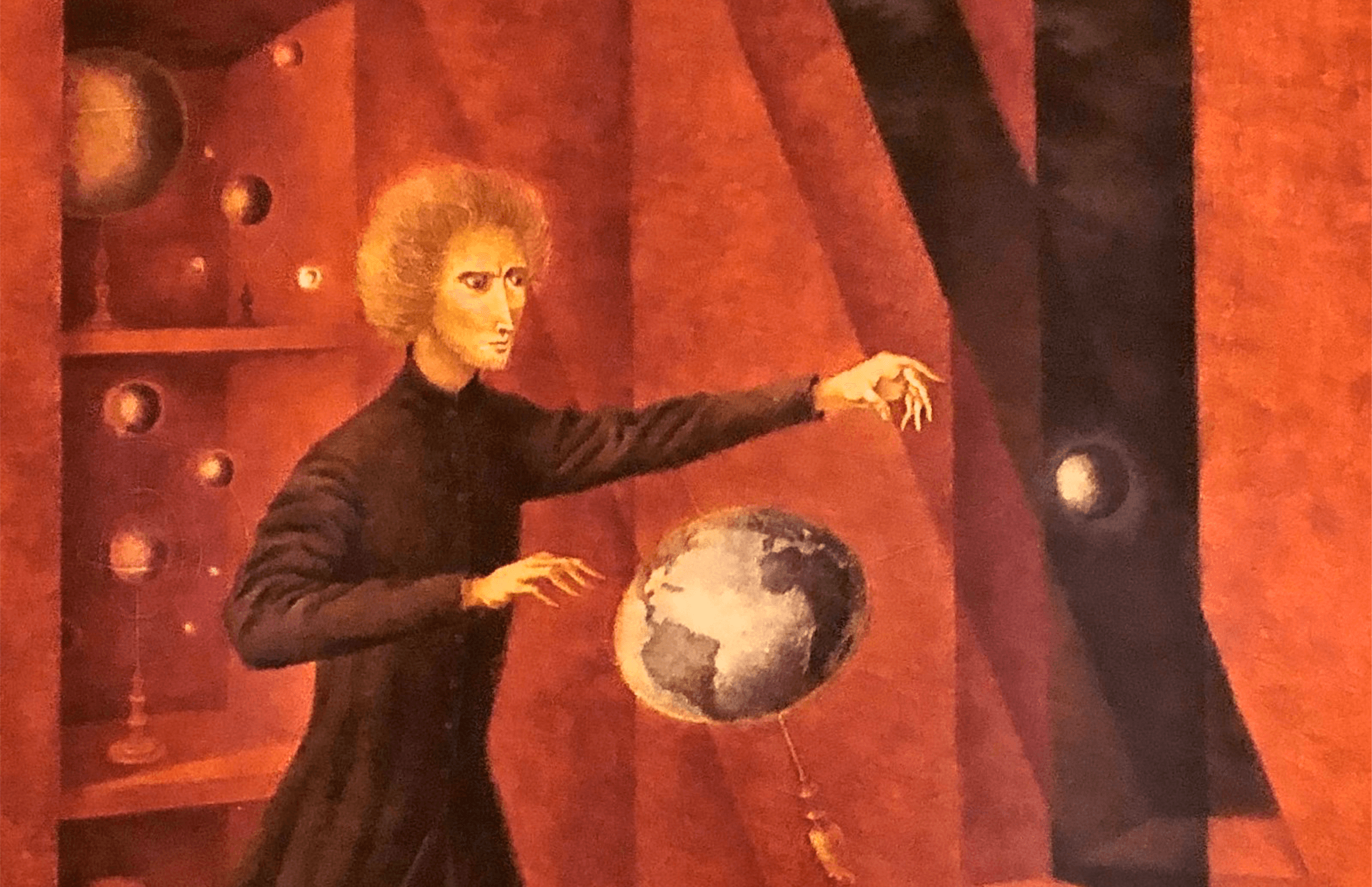 Tips for Creating a Home Planetarium (Courtesy of Remedios Varo)

A magical ritual of cosmic creativity, and a chance to reimagine our intimate universes. 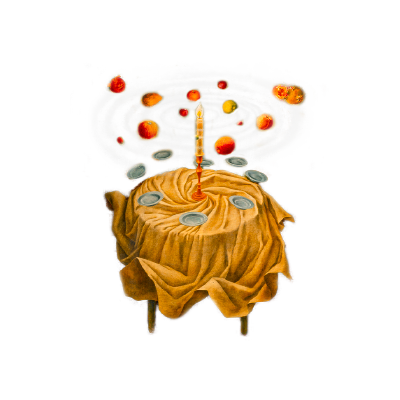 “To see a world in a grain of sand. And a heaven in a wildflower. Hold infinity in the palm of your hand. And eternity in an hour.” Thus read the lines that began William Blake’s poem Auguries of Innocence. The idea is simple and yet, infinite: worlds contain worlds, universes contain universes, smaller and smaller (or larger); size doesn’t exist, and only a powerful mind, one endowed with an extraordinary sensitivity, could put this into words with such mastery as did the famous 19th-century poet. But the macro and micro-universes, their ominous interconnectedness, have been a source of inspiration for artists and thinkers since antiquity, even up to the present day.

Almost two centuries later, and in a totally different context, another artist spoke of universes existing within others, in two letters and, this time, referring to the small cosmoses existing around us, in our intimate spaces, those whose bodies are the objects within our homes. Of this, wrote the surrealist painter Remedios Varo.

The fascinating imagination of the painter, born in Catalonia and later re-settled in Mexico, was a veritable cabinet of curiosities. Magic, astronomy, alchemy, esotericism, botany, music, mathematics, the kabbalah, hermeticism, and Jungian archetypes, among many other themes, all converged there. The result is in her dazzling pictorial works which, taken together, make up a unique bestiary of fantastic beings seen in no other place or time. Varo was also a courageous political activist forced to leave her country because of her explicit rejection of the Spanish fascist regime.

Varo’s fabulous creativity also leaned towards the world of literature. She was especially inclined towards Surrealist written expressions, like the exquisite corpse. Varo wrote countless letters in her lifetime. It’s a body of epistolary work showing many of the territories touched by her spectacular imagination. The letters were exhibited and became widely known a few decades ago as part of an exhibition at the Museum of Modern Art in Mexico City, where a good number of her works are on view.

Varo expressed in some of her letters the possibility of creating universes within her home, planetary universes made up of her personal possessions and which were part of her most intimate daily life. It was something like Blake’s statement that a universe can be contained in a grain of sand. In a magical exercise, she explained with remarkable verbal dexterity, and one certainly surrealistic, the order she gave to objects and furniture (and even her cat) —suns, meteors, moons, and stars— comparable to a solar system which, by the way, she compared with the solar systems in the homes of her friends and acquaintances.

(…) After long years of experimentation, I have come to be able to arrange in a convenient way the small solar systems of the home. I have understood the interdependence of the objects and the necessity of placing them in a certain way to avoid catastrophes, or to suddenly change their placement to provoke those events necessary for the common welfare. For example, choosing my big leather armchair as a central star, having around it and 50 centimeters away, in an east-west position, a wooden table (primitively, a carpenter’s bench and strongly impregnated with artisanal emotion). Behind the armchair, two and a half meters away, is the skull of a crocodile. To the left of the armchair, among other things, is a pipe encrusted with artificial shimmering stones. And to the right, three meters away, is a green jug of ordinary pottery. I have a solar system (I won’t go into a detailed description of all of it, it would be too long), which I can move at will, knowing in advance the effects I can produce, although sometimes the incalculable is produced. This is provoked by the rapid trajectory of an unexpected meteor through my established order. The meteor is none other than my cat, but I’m gradually coming to master this chance factor, as I have found that, by feeding the cat exclusively on sheep’s milk, his trajectory produces almost no effect.

Of course, my friends are also engaged in conveniently arranging small solar systems in their houses, and we have established an interdependence among them all. Sometimes we change stars from one house to another and, of course, no modification is ever made without all of us agreeing. Otherwise sometimes unpleasant things happen. I must say that we have come to do all of this thanks to a long and thorough study of mathematical variations and combinations and by the natural ability of one of our members to group beings and objects according to their true natures. The first step was our friend’s startling revelation that his right shoe, a red velvet curtain, and an operatic fragment (which could be heard at that moment) were all exactly equivalent. From then on, everything was easy, since summing things up in large groups, mathematical work on variations and combinations is done quickly.

In another letter, handwritten in French, she speaks of the solar system she’s created on her worktable, using the objects she had on hand:

(…) Shortly before these pictorial phenomena took place, I had given myself over to the task of rearranging the solar system on my table, a task which needs to be performed every 210 days, as it constitutes an obligatory task for all the adepts of the group “the observers of the interdependence of domestic objects and their influence on daily life.” This group, active for a long time, has already made remarkable realizations which make life simpler from a practical point of view. For example: I move a can of green paint about five centimeters to the right, I stick a thumbtack next to a comb and, if Mr. A… (an adept who works in coordination with me) puts, at that very moment, his book on beekeeping next to a pattern to cut a vest, then I am sure that there will be, on Madero Avenue, a meeting with a woman who interests me and whose origin I have not been able to find out so far, nor her address. We have made such conquests in everyday life, as you can see.

By manipulating an old telephone directory, a bouquet of laurel, a thumbtack, a comb, a bottle of green paint, a woman’s shoe in violet velvet embroidered with pearls, and a fake 5-peso coin (this set of objects is my instrumental universe, the function of which is concordant and interdependent with that of the other members of the group). I allowed myself to introduce, recently, as a novelty, a stuffed hummingbird filled with magnetic powder. It was tightly bound with a cord as mummies are wrapped but using a red silk thread. I did this without warning my colleagues, a profoundly serious transgression according to the group’s regulations. Only our boss, with his long experience and high degree of knowledge, can do such a thing without causing serious consequences. Moreover, I expressly placed the can of green paint under a beam of red light which was filtered through the stained glass of my window (a complementary horror!). I did all this without measuring the consequences (having just joined the group, my control extends exclusively over the objects I’ve mentioned above). Predictably, certain incidents have occurred since the day of my transgression: my best shirt was burned, a large deposit of salt has accumulated under my bed, and the next day the beginning of the surprising transformation of my pictorial inspiration took place.

Varo’s remarkable words describe an even more remarkable ritual: that of finding universes around her, defining, and manipulating them (a near divine act). Inadvertently, the letters, not written for publication, become a chance to see our surroundings through different eyes, to find the miniature universes surrounding us (and which we are), and to look at the world from a point of imagination, magic, and metaphor.