Frequencies in Yucatan: A social and artistic detonator

The artistic project Frequencies invites children and teenagers to re-signify their classrooms and explore their creativity and individuality through drawing, thus creating an archive of their thoughts and experiences. 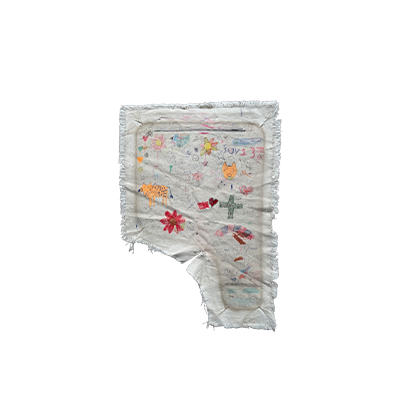 Across all cultures, throughout human history, we have drawn. Very early on in our lives, we figure out ways of doing so, like an instinct. Perhaps because of that, drawing might be perceived as a simple act. Most of us, however, when scribbling, sketching, doodling, annotating, or mark-making, simultaneously combine—consciously and unconsciously—the act of drawing with that of thinking.

For generations, students from around the world have spent hours sitting behind a school desk. To such an extent, one could grant these seated stations, where we spend a fundamental part of our formative years, the habitable qualities of a room of one’s own. Regardless of the different school-dynamics, most teachers or tutors automatically define the relationship between students and desks according to other space and furniture conditions granted by their institution without much further questioning.

Therefore, drawing on these tables stands for a set of dichotomous conditions that speak to the fulfillment of an imposed obligation defined as completing time in school, and finding a relative space of freedom within such situation: carving out either room for intimacy, transgression of space, or for communicating various forms of knowledge and spontaneity too.

Inspired not only by masters of Primitivism and considering the relevance of children’s drawings as an attempt to unlearn certain processes, Colombian artist Oscar Murillo decided that, through a project entitled Frequencies, he would focus on this last source of inspiration.

In 2013, Murillo, who moved to London with his family at an early age, visited a school in his hometown, La Paila, Colombia, and asked for permission to cover the desks with canvas-fabric.

In the following months, students grew used to the presence of this initially clean element and, for once, they were allowed to scribble, draw, or paint without being afraid of getting caught.

Murillo realized that the project acquired relevant value as a long-term initiative, and at this early stage producer, writer and politologist Clara Dublanc, who specialized in migrant rights, joined him in his quest. From casual manifestations or deep representations of fear and desire, young people have relentlessly responded to this worldwide collaboration that underlines that participating in the project implies no rules, restrictions, nor grades.

To this date, the process adapts to different scenarios and contexts; schools in urban and rural conditions participate with Frequencies Institute to gather, during six-month periods, creative expressions as recording devices that pick up on activity and movement. Currently, the project continues to expand, develop, and transform as an active archive composed of nearly 40,000 pieces of textiles by subsequent generations of kids aged 10 to 16 that speak about their (and our) peculiar times. Frequencies gathers an enormous landscape of ideas, it stands as a unique reference library of young people’s thoughts.

From rock bands to poems and abstract images or pop references, some canvases become so saturated with layered information that a spectator must engage closely with it to decipher meanings or interpretations in the marks of color, paint, or ink.

Undoubtedly, learning from children and teenagers through these open-ended means has impacted Murillo’s artistic research and practice for almost a decade. His studio and the practical efforts undertaken by the team respond to the energy and resources that Frequencies demands, as a major project that continues to visualize ways of sharing and activating the archive or palimpsest of drawings from all over the world in different forms, formats, and situations, using Murillo’s own visibility and exposure as a recognized contemporary artist.

In 2022, Frequencies acknowledges that it is important not to settle down as merely a project that establishes the conditions for the young to intervene canvases or build a professional archive that can be consulted or exhibited, yet it hopes that beyond that, too, it continues to self-address questions and challenges such as: how to keep radicalizing and be radicalized? How can the digital spectrum allow a break from a conventional approach to this archive?

Inserted in the cultural territory of the Mayas of Yucatan, Frequencies Institute—with the support of TAE Foundation and galería kurimanzutto, along with various fundamental allies in the region like Baktún Pueblo Maya, Coordinación de Telebachilleratos de Yucatán, amongst others—began working in schools with little access to artistic curricula in communities within the state. The communities of Tekanto, Izamal, Muxupip, Xcanchakan, Sisal, Benito Juarez, Tepakan, Valladolid, Tahmek, Tekal de Venegas, and Timucuy, happily opened up to the project and, after months of working from home, they have welcomed students back with a canvas-wrapped desk as an invitation to participate. School directors in these communities have clearly manifested that the project, beyond addressing a space for free expression in their schools, seems to subtly be attending to the emotional well-being of their students in times of local accumulative desertion of school by the young.

Looking forward to embrace Frequencies as a longer-term collaboration within TAE’s priorities in Yucatan and beyond, allow us to imagine multiple ways for art to continue infiltrating the education systems of our times. Adam Phillips—psychoanalyst and writer, also selector of canvases for a recent iteration of Frequencies organized by Artangel in London—pointed out in a video interview: “these canvases show more than they intend and say more than they realize”.

So yes, drawing is a universal tool for thought that can be considered a simple act, but in fact, it is one that is profoundly powerful as a process-based manifestation of imaginative cultures.