A Spiral’s-Eye View of the Stars: On the Chichen Itzá Observatory

Chichén Itzá is home to one of the world’s oldest observatories, a space embodying the spirit and essence of the ancient Maya culture. 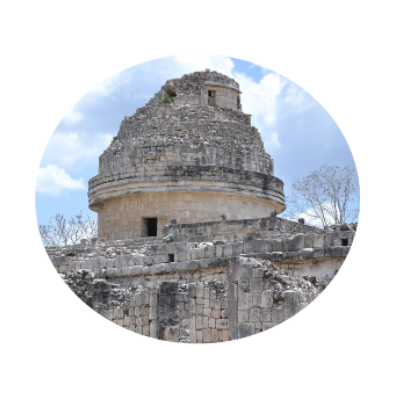 Today, when the glare of the cities erases the stars, we’re left with but a dream of the sky, the night, and their many secrets. Of the ancients, we’re left with songs and praises, and not a few of these were dedicated to the celestial bodies. One’s gaze is trapped at a crossroads: our little eyes think that in the sky we find a myriad of gigantic fiery eyes staring back at us. And in speaking of the astronomers of the past, it’s only appropriate to speak of the ancient Maya.

The Maya name, Chichén Itzá can be translated as “city at the edge of the well of Itzares.” The city was built by Maya groups of the Petén jungle who’d migrated to the Yucatán peninsula during the 4th century. Like other Maya urban centers, the edifications of Chichén Itzá were built with respect to the stars and their movements –either though alignments or through dazzling plays of shadow. This is especially true of the central observatory, the Caracol, one of the site’s most iconic structures. A play of light and shadow there can be observed on both April 29 and on August 13 –two important dates in the Mesoamerican calendar.

Though it can’t be determined for certain, everything seems to indicate that the Caracol, a circular structure all the more prominent within straight, angular, cornered Chichén Itzá, was an astronomical observatory. Some archaeologists believe the building was dedicated to the cult of Ehécatl-Quetzalcóatl (one of the many expressions of their feathered snake deity). They date the construction between the years 800 and 900 of the current era, during the so-called Post-Classical period. Although it’s a late structure, the name by which its creators referred to it is unknown. The current name, “Caracol,” is simply Spanish for “spiral seashell.” It was rather inevitable considering the building’s winding concentric staircase.

The Caracol offers exceptional views of the skies, something unusual for the Maya architecture of the time. Among its most impressive characteristics is the planning of the site with respect to the stars: one of the diagonals aligns with the sunrise during the summer solstice and with the sunset during the winter solstice.

What can be seen from the Caracol?

From the Chichén Itzá Caracol, one can see the extreme elongations of Venus and its points of maximum horizontal displacement. The windows of the upper tower are aligned with the major north and south declinations of Venus. The planet especially captivated the Maya imagination, and we can’t blame them: Venus has fascinated people all over the world over many different ages.

A Little on the Maya Cosmos

The Maya Cosmos was structured into three levels: a celestial vault, the human world, and Xibalbá –a flooded underworld where the very Sun fights to survive and to recover its brightness. Through their observations, Maya astronomers focused on precisely delimiting the position of the stars in the sky over the course of the solar year. Their calendars, even today, are surprising witnesses to that precision. On a peninsula as flat as the Yucatan, artificial markers, and guides, which is to say, architectural structures, were essential.

The Caracol building was excavated by Karl Ruppert. More than thinking about what remains to be unearthed, it hurts to think about what can never be found again. The fires of the Spanish invasion left the modern world without Maya books. These were made of the bark of amate, a tree whose branches embrace each other precisely as do the branches of knowledge. The vigor of the Maya culture, one still vibrant and living today, is manifested in a wide variety of social, artistic, culinary, and agricultural practices. The preservation and celebration of this heritage is the essence of La Vaca Independiente’s Batún Initiative.

*Cover picture: Daniel Mennerich – Creative Commons (the image has been cropped to fit our pagfe format).